2023 Games Updates and Next Live Demos

PAX Unplugged and MAGFest were both delightful experiences where I got some great feedback from folks about the status of both of my games.
For Alter Arms, I had some minor updates for special abilities, and have introduced tokens into physical play to keep track of turns.
For Skrap Packs, I’ve updated some cards and included mechanics for restricting inventory. This has encouraged players to be more considerate of the items their characters keep, use and combine.
My current upcoming goal is to work on additional theme cards for Skrap Packs—this time based on medieval fantasy adventures—and setup Skrap Packs for sale on Itch.io by the end of the year.

The current plan is to demo both games during KatsuCon 2023 on both Friday and Saturday. 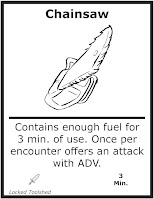 I have two conventions coming up where I’ll be running both Alter Arms and Skrap Packs.
The first is PAX Unplugged in Philadelphia, Pennsylvania at the Pennsylvania Convention Center, Dec. 2 & 3 as part of Games on Demand.
The next will be at Super MAGFest in National Harbor, MD at the Gaylord Convention Center, Jan 5-7, 2023 as part of the MAGFest Indie Tabletop Showcase (MITS).
Some changes I am implementing for playtests the playtests include:
Skrap Packs Updates:
I hope to see you at these event! If not, feel free to either reach out to me or join my discord for more frequent updates.
at November 28, 2022 No comments:

I'll be in the tabletop room at BlerdCon 2022 on Saturday, July 9 from 2PM - 8PM Eastern time. Be sure to stop by for a demo at one of my favorite conventions!

Email ThisBlogThis!Share to TwitterShare to FacebookShare to Pinterest
Labels: demo 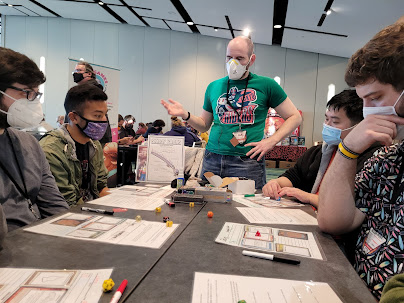 I'll be running Skrap Packs at AwesomeCon 2022 in the tabletop gaming room on Saturday, June 4 during two, 2-hour sessions.

Find the listings and sign-up here. Hope to see you there!

Email ThisBlogThis!Share to TwitterShare to FacebookShare to Pinterest
Labels: demo

This is the production blog for the crafting tabletop roleplaying game Skrap Packs. Here, I will be posting updates on the status of the game and general information for those who want to find out more about it.

How Do You Play Skrap Packs? 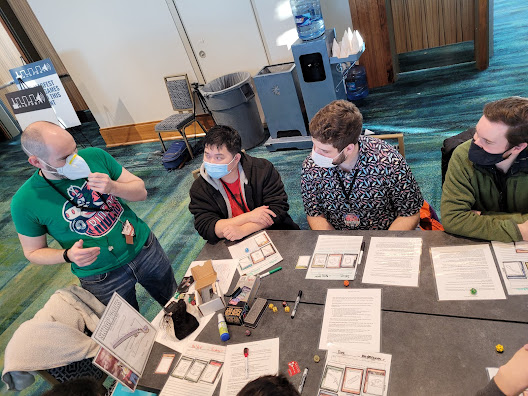 In Skrap Packs, players create characters that explore settings, scavenge items and assemble new ones that they can use to solve problems. Each item is in the form of a card, which are also used to help the game master (GM) in generating the world.
Each item is represented by a card that the GM pulls from one of the game decks, different decks representing a different kind of item.
When presented with a challenge, players will look at the items they have and propose to the GM how they can use them to resolve the issue. The GM and player go over a checklist to calculate a bonus that they'll apply to a roll to see if the move is successful or not.

What's This About Crafting?

There might be times when players realize their characters have items to put together a more useful tool than what they already have. When they do so, they present to the GM what they want to make, and the items they want to use to make it. The GM and player then go over a checklist to calculate a bonus that they'll apply to a roll to see how many uses this new crafted item will have.

Both when calculating the bonus for using items, and when calculating the bonus for how many uses an item could have, a major factor is what the character's title, or background is. There are no real stats in Skrap Packs, instead, characters effectiveness at performing actions is focused around the items they use to perform a task, and their character's effectiveness at using those tools for that task.
Players create their characters' title by interpreting two things:
Players write their character's title at the top of the page, and reference it as they play the game to calculate their bonuses.
Gameplay has players come up with interesting ways to use the items they start with, scavenge, or create, based on who their character is and how they develop over the course of the game.

The marketing plan for Skrap Packs is to produce individual packs based around themes. Each pack would contain a deck of mundane, plot and sentimental cards. There would be one deck of mundane cards that revolve around things you could randomly find in the setting proposed by the pack. There would be at least two different decks of plot cards, each for different paths that the plot could go down based on the pack's setting. Lastly, the single sentimental items deck would provide new fodder for character creation, both for players and non-players.
This ties into campaign play; players take the role of interdimensional scavengers, with each pack offering new locations to visit, plots to experience, and items to collect.
at May 31, 2022 No comments:

2023 Games Updates and Next Live Demos

PAX Unplugged and MAGFest were both delightful experiences where I got some great feedback from folks about the status of both of my games. ...